Greater Sacramento Region Recovers All Jobs Lost During the Pandemic
For the first time in 20 years, the region recovered faster than California

New data from the Federal Reserve Bank of St. Louis shows that the Greater Sacramento region has recovered all the jobs that it lost during the COVID-19 pandemic. For the first time in 20 years, the region recovered faster than California. The region was second only to Riverside for job recovery among major metros within the state.

“The Greater Sacramento region was the last metro area in California to recover all the jobs lost during the 2008 recession. Now, it’s recovered from the COVID-19 pandemic faster than the state. This progress is a testament to the work of the 40+ CEOs, 20 communities and higher educational institutions on Greater Sacramento Economic Council (GSEC)’s Board of Directors, who have been championing a unified regional economic development plan over the past seven years,” said GSEC President & CEO Barry Broome.

GSEC was founded in 2015 to respond to the economic downturn and lead regional tradable-sector economic development. This focus has reduced regional dependence on government jobs and significantly improved regional economic inclusion. It helped decrease the region’s dependency on government jobs from 27% in 2009 to 22% in 2019 and improve its inclusion ranking from the Brookings Institution from 84 in 2014 to 15 in 2021. 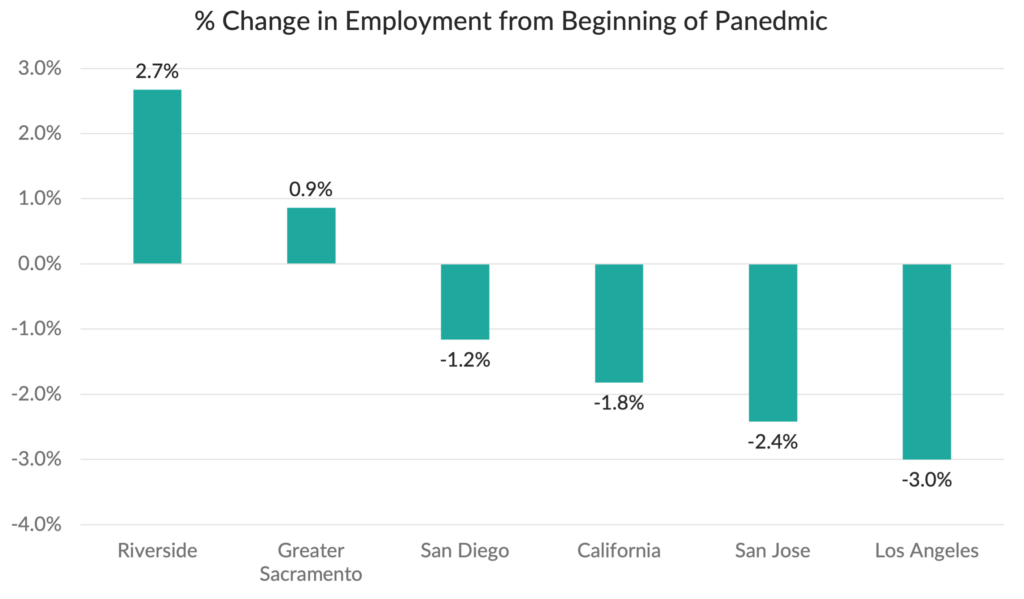 Greater Sacramento’s regional economy showed incredible resilience during and after the pandemic as it continued to attract investments and make progress on significant projects. Folsom’s PowerSchool, for example, saw its valuation rise to $4.3 billion following its IPO in 2021. UC Davis broke ground on Aggie Square, a $1.1 billion, 1.2 million-square-foot life science research park at its Sacramento campus, developed by Wexford Science & Technology. The California Mobility Center is also growing, with plans for a $30-50 million expansion of its 25k-sq-ft ZEV ramp-up factory.